skip to main | skip to sidebar

I've been rethinking my use of both blog and website. My website was designed several years ago, so I'm stuck with categories which no longer reflect my writing practice, which is now a bit less theatre and quite bit more prose and poetry and other things. As for the blog, I haven't added anything in months. And of course the whole online environment has changed, and is continuing to change. So I'm changing too. I will no longer post on this blog or run my old website. (Although they will continue to bounce around in cyberspace: the blog for who knows how long, and the website until my current subscription runs out early 2012.)

My new address is http://noelle-janaczewska.com and it's part website part blog. I'm still working out how I'll use it (I've migrated over the odd favourite from the website) but it will reflect my current writing interests and praxis. Check it out.
Posted by Noëlle Janaczewska at 9:54 am No comments:

In praise of complexity

Less is more and simplicity can speak volumes …

As a dramatist I compose what’s said and what is not, words and silence, into a play or performance text. Keep it simple, we’re so often told—at least, I’m often told that—by dramaturgs, directors, critics and others. Like a mantra. But why? What’s so great about simplicity? Why is complication such a no-no?
I like complexity. I think some subjects and situations demand it, and that simplicity can be reductive and flattening. I’ve read and seen a few things recently that, in my opinion, could have done with a few more complications.
The simplicity I mean here is not that distilled and eloquent simplicity that insightful writers sweat to tease from complexity, nor the iceberg structure of a good poem, but a kind of intellectual laziness.
‘We have to remember that what we observe is not nature in itself, but nature exposed to our methods of questioning.’ Werner Heisenberg in Physics and Philosophy. (I think this line also crops up in Michael Frayn's play Copenhagen.)
Sometimes less is just less.
Posted by Noëlle Janaczewska at 5:05 pm No comments:
Labels: complexity, Copenhagen Werner Heisenberg, Michael Fryan, simplicity

Readings of jazz poetry from extempore 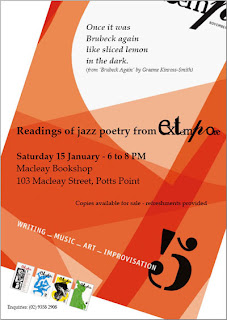 Hope to see you there.
Posted by Noëlle Janaczewska at 2:34 pm No comments:
Labels: extempore, jazz poetry, Macleay Bookshop

Haven’t posted for months. Although I have been writing: a play I can best describe as the third ‘first draft’ of a commission; rough sketches of several poems; copious notes for a major non-fiction project, and a monologue. And I was overseas in September, part family visit, part research. For that non-fiction project, and for a collection of poems that I hope will end up as a chapbook.

I’ve also been thinking a lot about what I want to write over coming while—the next few years, at least. It kicked off with a decision not to do any more 10-minute pieces (7-ON gigs excepted). I’ve written quite a few of these, some went OK, some not so OK, and I’m not saying that I’ll never ever write another one ... But here’s my reasoning: while the 10-minuter has its uses and particular pleasures, for me they stopped being ‘opportunities’ and become distractions from the main game. I wasn’t grappling with big ideas and deep creative and intellectual ambition, I was fiddling about on the fringe, in order to feel that I was still on the list of working playwrights.

I emailed these thoughts to 7-ON and we had some great debates—about the pluses and minuses of the short form, about the proliferation of shows, seasons and festivals of short plays. What this explosion reveals about current theatre ecology; how this snapshot form reflects and engages with our digital world (or not); why we’re seeing the names of more and more established and well-established playwrights in program line-ups (interestingly, a trend not replicated by directors), and what that means for new and emerging dramatists trying to catch a break ...

As working writers we constantly reassess and rethink, try different tacks and ways of getting our work into the world. Explore different processes, genres and even artforms. Post Songket in 2003, I set myself the task of writing quickly: 5 weeks to go from concept to a draft solid enough to send out. I also vowed to redraft only when a company and collaborators made a definite commitment to production. I wrote 3 scripts this way. (Redheads, Mrs Petrov’s Shoe and The Stepping Stars of Bóronkowice, which began as a stage play and ended up on radio.) The cloudburst got 3 works into production … and generated another phase of reflection, this time culminating in a decision not to write any more plays ‘on spec’. And although I still have a couple of unproduced ‘spec’ scripts (written before that decision) that I’d like to see get up, my (live) performance writing has since been confined to the occasional commission, and to monologues or ‘performance essays’ that I've presented, or can present, myself.

I’ve always liked my theatre to be either exuberantly, audaciously theatrical (e.g. Caryl Churchill, the work of English company 1927), or the complete opposite, bare and basic (e.g. the work of American Mike Daisey). I recently saw 1927’s new work, The Animals & Children Took to the Streets, and loved it even more than their previous show, Between the Devil and the Deep Blue Sea. To write for theatre like that would be inspiring, but too much of the theatre on offer falls into a gravelly middle ground that doesn’t particularly interest me.

And so to our infatuation with actors. I suppose it’s part of the whole celebrity obsession thing, but this weekend it got to me. Before I continue, I should say that some very good friends of mine are actors, and this little rant isn’t about actors per se. It’s about attitudes towards them. Why do we mystify their craft, sometimes to the point of infantalisation? Why do a select few earn a motza, while the vast majority work for lousy wages in lousy conditions?

Anyway. In one or other of this weekend’s newspapers (The Sydney Morning Herald and The Weekend Australian) there was a profile of Sydney Theatre Company co-AD Andrew Upton in which he rhapsodised at length about how marvellous actors are. A television reviewer in another article raved about a bunch of actors and suggested that we just let them lose and record whatever they say or do. (I assume—I hope—she’s joking and does realise that actors usually speak lines written by writers and directed by directors.) Elsewhere Griffin AD Sam Strong, when asked who had it tougher, playwrights or poets, replied poets. Because playwrights get to hang out with actors. Why is hanging out with actors better than hanging out with other writers? Or with painters or horticulturalists for that matter? And this reminded me of the previous weekend’s preview/publicity article for a TV series which, if you didn’t know better, would have you believe it was all the work of one extraordinary star actor. (BTW, I’m not blaming individual actors for these misrepresentations, but the machinery, PR and otherwise, that elevates actor to hero.)

Critics, I’ve noticed, like to cosy it up with actors. They’re often way more comfortable talking about performances than they are about such elements as design, music or direction. A production is solely the performances of the actors—that’s what they often imply. Even in film, where so much of a performance is constructed by the camera, or after the event, by editing. Yes, I accept that camera and editing can’t make a crap performance soar, but they can—and do—make uneven performances good enough to win awards. In theatre of course, actors are more exposed and do carry more of the show. Perhaps for this reason, reviewers are generous towards them, in a way they rarely are to writers and directors. Have you ever read a review that said: This was a fabulous play/text, complex and nuanced, but these actors were simply not up to the task? I haven’t. Perhaps critics dwell on actors and their performances because they find character an easier topic to riff on than say, visual style or structure or registers of language?

Back to writing. I plan to finish the monologue that was called Bounce and is now Good With Maps, early December. It explores some quite difficult, and personally confronting material, so it’s taking longer than I’d planned. After that I’ve set aside a few ‘technology days’ to update and switch over various things. (After a computer crash/scare, I’ve decided that clouds are a must for writers, and I now have my files backed up in Dropbox.)

While I was in England, I learnt that a one-act play I wrote for children called The River That Ran Out, was Highly Commended in the Trinity Guildhall International Playwriting Competition (for audiences of 11-years-old and under). That news was particularly sweet because a few minutes earlier I’d discovered that my ATM card had been scammed in London, and my bank account cleaned out! Back home in Sydney The Story of this Moment was one of 6 scripts short-listed for the inaugural 2010 Richard Burton Award for New Plays. It’s a very out there, unconventional music-theatre script, so a surprising inclusion. But very welcome.

Also in December, I begin with the thistles, my big non-fiction project, and I am so looking forward to it. To immersing myself, getting lost in a really big project ...
Posted by Noëlle Janaczewska at 3:55 pm No comments:
Labels: 'spec' scripts, 1927, 7-ON, actors, different writing processes, monologues, short plays

Unfortunately Asialink have had to cancel this event. Sorry.

I’m presenting my monologue Unrequited in Melbourne as part of Asialink’s Winter Writing Series. It’s part of their Anti-travel-writing event along with 3 other writers: Linda Neil, Petrus Spronk & Andrew Sant.

Korea captured my imagination in 1993 and has held it ever since. I've tried on several occasions to escape into other countries in the region, but it's Korea—South, North, and the diaspora—which figures most prominently and most often in my writing. From a car crash in Pyongyang on an afternoon so cold the wind blew the words back down my throat, to an encounter with Chekhov in a Busan bar, Unrequited attempts to understand this rather one-sided love affair.

You had to be there is my review of Penny Arcade's Bad Reputation: Performance, Essays, Interviews. It's published in the latest issue of Jacket Magazine, or you can read it here.
Posted by Noëlle Janaczewska at 11:25 am No comments:
Labels: Jacket magazine, Penny Arcade, review 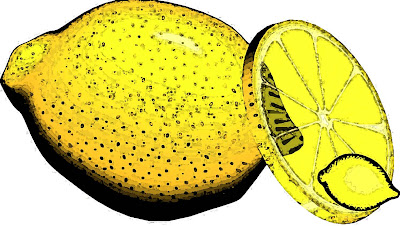 You can email me at noellejanaczewska@gmail.com

Find out more about my work & read excerpts, essays, etc. at http://noelle-janaczewska.com/

If you want to use or produce my work, please contact my agent here 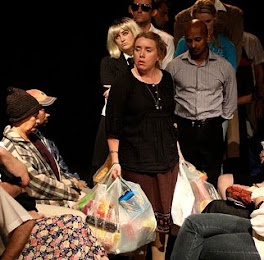 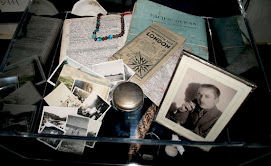 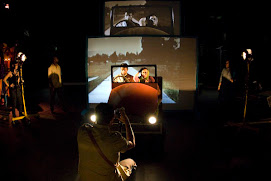 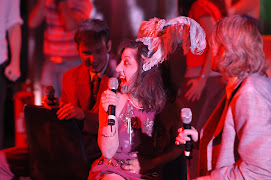 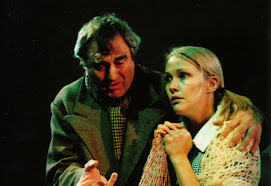 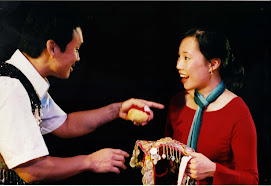